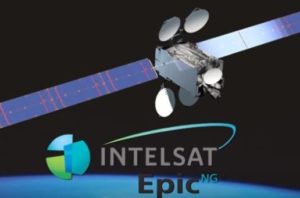 With a blinding flash of light and the thunder of 220,000 pounds of thrust pushing the Ariane 5 ECA rocket off the launch pad Wednesday at Guiana Space Center, Intelsat 29e began the final leg of its mission to usher in a new era in commercial satellite communications.

Intelsat 29e, the first of a planned constellation of at least seven Intelsat Epic high-throughput satellites (HTS), pierced the early evening darkness en route to geosynchronous orbit at 310 degrees East, over the Atlantic Ocean. The satellite will provide unprecedented coverage of South America, the Eastern two-thirds of the U.S. and flight routes between the U.S. and Europe.

Thirty-eight minutes after the 6:20 EST liftoff, the satellite separated from the rocket’s upper stage and ground engineers confirmed signal acquisition. Click here for a video of the successful operation.

The launch was the 137th for Intelsat, but “this was different from the previous 136,” Intelsat CEO Stephen Spengler told the crowd gathered at the Arianespace facility in French Guiana. “Today’s launch represents a truly ‘epic’ moment in communications history.”

Remotely Piloted Aircraft (RPA) usage continues to grow, both in numbers and sensor capability, escalating the need for bandwidth. This is capability U.S. Special Operations forces – among others — count on in their work in as many as 100 areas around the world in any given month.

But that need also is felt in theaters over which RPAs have flown for more than a decade.

Lt. Gen. Bob Otto, the Air Force deputy chief of staff for ISR, put the need for RPAs in perspective at a Washington breakfast recently in which he said “the unconstrained dependence on ISR” can never be met, even – or especially – with troop drawdowns. There were 11 full-motion video combat air patrols (CAPs) over Iraq in 2005-2007, he was quoted as saying in a story posted on aionline.com, and Central Command commanders complained that they met only one-third of the theater requirements. “Now we have 65 CAPs, yet CENTCOM says they are still only meeting 21 percent of the requirement,” Otto said.

This requirement can be met with what Intelsat Epic can offer. Epic will deliver SATCOM data rates of up to 50 Mbps, without requiring any hardware changes to the existing antenna/modems installed on current RPA platforms.

The U.S. military has long had a goal of alleviating stress on ground personnel by doing more ISR processing on the RPAs that collect data.   As such, analysts are trying to cope with a growing flood of available data, particularly bandwidth-sapping full motion video.  This increase in data has been difficult to accommodate because of on-board space limits for processing tools, and because of the bandwidth available for data transmission.

Intelsat Epic opens the door to smaller satellite terminal use, with the possibility of sending as much as four times the sensor data to ground stations. Intelsat Epic‘s flexible, open architecture also supports continued use of legacy systems, critical in times of budget difficulty. Rather than requiring costly new, dedicated infrastructure and training to sync with the closed architecture of HTS platforms, such as Inmarsat Global Express, Epic customers will be able to use existing equipment enabling them to reap significant savings.

The next satellite in the Intelsat Epic series is due to launch in the second half of the year. That satellite will cover the Africa-Middle East area, where mobile communications is sorely needed and where RPA bandwidth support is in high demand.